Deep breath, get the button pressing combo right and all of a sudden my exposure six pack transforms into a captured star that is also charging my Garmin. Rather than a sullen baked bean tin that thinks I'm plugging a charger into it. When not operated by an idiot, smart port charging is a brilliant tool for the long distance cyclist


Ok. lets go.  370K from Anglesey to Cardiff via four checkpoints, no fees, no support, no prizes. The ingenious brainchild of the team at www.theracingcollective.com to bring back grass roots (or routes), low key, low impact cycling races just for the love of it.  My first long distance, unsupported race. Ever.

It's an eclectic route I have planned, through hill and valley, B road, cycle route and gravel path. A chance to see the country of my birth in a way I have never done before.  As efficient planning goes, it turns out to be a stunningly bad idea. But my journey is all the better for it.

The evening stretches away from me into night as the lights of Bangor fade and I climb past Penrhyn Quarry and beyond, and I settle into a steady rhythm, punctuated by the odd gate, I push on towards Capel Curig and my first real cross country excursion.

I should probably point out at this stage that my ride of choice is a Cannondale Slate, not your obvious choice for solo bike packing type races, but with a 30mm carbon fork and 650bx42c tubeless gravel tyres just the thing for my route, and boy did I need it.

Beyond Capel Curig it becomes obvious that my route, planned via satellite imagery, is a disaster. The gravel path turns out to be unrideable, even unwalkable in my carbon disco slippers, I turn back after a pointless 10 minutes slog to take the long way round, but after another 10 minutes I remember an alternative route from my planning and loop back round, I even pass the foot of my previous unclimbable path, another idiot moment.  Plan B is a little better, but very rough, at the limits for my bike but it's a blast to ride post summit.

I'm eventually back on sensible tarmac, after some crazy rough downhill trails, and tracking towards Stwlyn Dam, checkpoint 1.  What a climb it turns out to be, a snake of tarmac rising through the darkness with the occasional glimpse of sheer rocks and imposing dam wall.  The amount of cycle lights heading in the opposite direction to me further confirms the inefficiency of my route choice, or glacial slowness.

With my first checkpoint done I'm feeling good, and let gravity and the fat tyres on my slate swoop me down towards the lights of the sleepy village below. Onwards.

Soon I'm back into minor country roads, and my old Garmin 810 decides to make the first of it's many errors. Losing satellite lock, letting me travel down the wrong road and then crashing. this happened numerous times through out the ride, but miraculously it never lost the ride data giving me a final uninterrupted ride.  I'm forced to rely on my mobile phone whilst I wait for the garmin to sort itself out.

Checkpoint 2 arrives with the dawn, Lake Vyrnwy, a jewel amongst the trees, but the pre dawn chill is very evident, so I pause briefly to take my obligatory selfie and move on.  At this point I am aching for the warmth of the sun. Low cloud and low energy levels make for an tough next hour on the bike, even the descents, whilst dodging suicidal sheep, are hard going as the wind chill makes me shiver.

Eventually the sun breaks through, and with it my spirits lift. which was a good thing as the short cut (now forever named the longcut) to checkpoint 3 takes me on an off-road epic.  The smooth gravel path cut through the forest leads me down into an imposing valley, sheer sides and a bloody massive waterfall ahead give no indication of how I can possible exit this... ravine.  It eventually becomes clear that the forest trail loops back and forth on itself across the eastern slope of the valley to propel me out eventually on high open countryside, and another trail that is composed mainly of head sized rocks and puddles. I couldn't imagine a tractor driving along this let alone my bike, but I press on, using all my skill to stay upright and moving forwards.

I am rewarded by stunning scenery, and the soundtrack of a high hunting buzzard, warm sun and a cool breeze. It's a perfect mountain biking trail, and I really could have done with a mountain bike for it!

The final ignominy is when I attempt to cross a small river. My road cleats, bashed to a pulp by many scrambles across rocky trails, refuse to disengage and I tumble sideways into the water.  I don't have the energy to swear, but simply mutter a mild 'oh no'.  Back up, and I discover my food bag was open, my fruit pastilles, devoid now of their sugary coating, bob about like fairground fish.  I eat them anyway.


Checkpoint 3 arrives, Nant-Y-Moch reservoir, and my Garmin crashes again. I wander about for ten minutes and take a picture in the wrong place before eventually finding the dam wall. I am out of food and water, and contemplating a detour when, at a T junction in the middle of nowhere, (actually the village of Ponterwyd) I glance right and spot an oasis, well, actually a BP shop and petrol station.

Tea with three sugars, coke, more fruit pastilles, pork pies and heaven of heavens... ready buttered soreen fruity malt loaf!   Excuse my French but ready.fucking.buttered.   I may have cried a little when I saw it.

The ride to checkpoint 4 was a joy, in good spirits I sped along smooth quiet roads and enjoyed, stunning views across the Welsh countryside, my early morning chills were long forgotten as the temperature soared towards the high twenties (like others I was pretty sunburned by the end of the day) . Despite having cycled well over two hundred kilometres my energy levels were still good due to now regular refuelling stops as civilisation became more prevalent. However I was by now starting to suffer horribly with saddle sores which was limiting my time in the saddle.

Another Garmin failure sent me on a magical mystery tour of Brecon, followed by a tortuous B road
climb that tested my tiring legs and compact gearing almost beyond their capability. A long downhill to checkpoint 4 at Talybont reservoir gave me a brief opportunity to recover before another brutally steep climb towards Merthyr Tydfil. These last few climbs were mentally the toughest, as I had convinced myself that it was all downhill after checkpoint 4, and each climb was a blow to my confidence.

I was in serious pain at this point, almost contemplating bailing on the ride, but the signs for the taff trail renewed my resolve and I pushed on where I could, alternating between time in the saddle and stand up free wheeling when the pain became too severe or the path turned downhill.

Physically I was in good shape apart from my broken arse, the bike had coped well, and I had kept my energy levels up for most of the ride. As I approached Cardiff the taff trail became busier with life as people enjoyed the sunny bank holiday weekend. Finally the landmarks of Cardiff  appeared before me as I negotiated the last few kilometres into Cardiff centre. As I passed the Millennium Stadium the lengthening shadows reminded me that this day was drawing to a close, and I pushed on through the busy city towards the finish at Cardiff bay barrage. 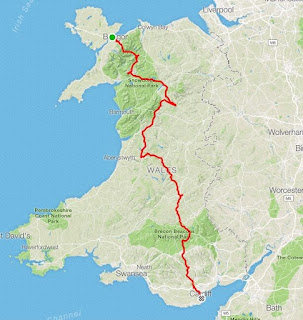 My family and some old friends from Cardiff were there to welcome me after 21 hours in the saddle on my own. I was sore, tired, hungry but elated at the achievement.  A true challenge is one where finishing is not a certainty, and that was clear in my mind when I had set out the previous night. But I had expanded my horizons and my understanding of my own capabilities.

If I was to ride this again, I would do a lot of things differently, but as an experience and an opportunity for learning?


I wouldn't have it any other way.